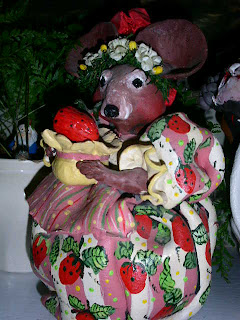 if you have followed my blog...you have met Vivienne 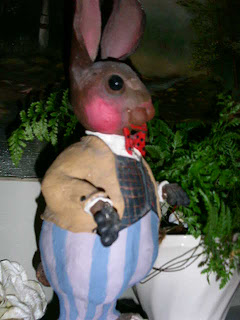 and you have met Antoine...to fill in those that haven't heard the story...I will recap.
30 years ago I used to work in Downtown Portland & walk past a store with the most incredible window displays. they were magic. they were Alice in Wonderland-ish...took me away to another world. I wanted to buy some of the whimsical creatures...but they were priced way out of my league.
29 years later I found Vivienne in a thrift store (6.99) ...she came home with me but was so very lonely.
A year later I bought a house. Antoine was in the closet of the house. The entire house was empty except for him. I kid you not. For real. He was in the closet.
A year later... 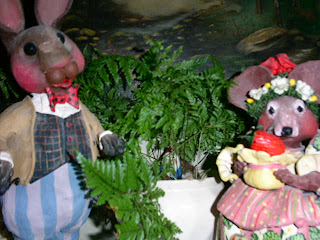 Colette is found at an estate sale. Her original price tag of $365. was still on her. She is priced 45 dollars, but it is half price day. 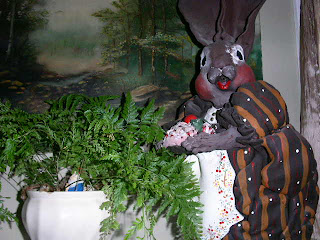 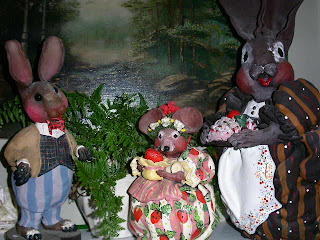 I am overjoyed at my collection. In awe of the fact that Antoine and Colette came to me via Kristen and Greg (a rather long story- they are my landlords and they do estate sales). They had no idea of my dream of owning these. They had no idea he was in my house that I bought from them. They have brought a 20 year (well, 50 now) old girl lots of joy.
Antoine, Viv, and Colette are living on my mantel.
Always ready to add to the family...
Posted by melanie at 10:04 AM

So glad to see the pictures and hear the story all at once! Meant to be obviously and they were meant to belong to you....no matter how long it took for you all to come together!

Mel,
LOVE your collection!!! They are beautiful, especially love your newest addition, she's gorgeous.
That is truly an amazing story of your collection and how it came about...thanks for sharing it and keep your eyes open, you never know.....

That is a lovely and rewarding story. You wanted them and there they are were one by one back into your life...at a bargain price to boot! It was meant to be!

There is the law of attraction in practice, right?

Cute story and glad they are living in a most welcoming of homes:)
Joyce

Well, hello - I just had to stop and leave you a note because you have such a fabulous blog. Your posts are interesting & you have wonderful pictures too. It's all perfect ! Thank you so much for sharing and best wishes ...

What a wonderful collection and such a great story of how you acquired them all :) thanks for your kind words on my blog :)

all my favorite things ETSY shop

melanie
Portland, United States
I love old stuff...so my blog is about my finds, my redos...my family, life and friends. I sell my treasures at STARS and SPLENDID antique malls in Portland, and occasionally have a personal sale at my house and EBAY. thanks for visiting!

MY EBAY SELLERS NAME IS comehome2me

I list things from time to time on Ebay...
happy hunting out there!